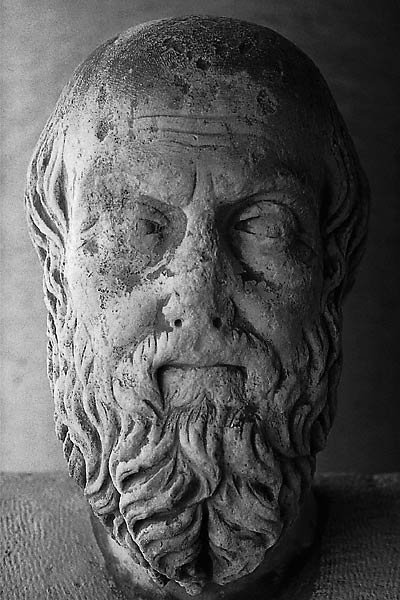 The Histories of Greek historian Herodotus of Halicarnassus were written between 430 and 424 B.C. The text narrates the wars between Greece and Persia (499-479 BC). Later editors divided the Histories into nine books, named after the Muses.

Herodotus describes the tribal customs of the Scythians, nomads inhabiting what is now southern Russia. Herodotus relates how the Scythians inhaled hemp vapours to induce insensibility. Hemp was first cultivated and then burned like incense in closed rooms. The effect was intoxication and then oblivion. Although on this basis it may be claimed that hemp was the first inhalation anaesthetic, the technique was never exploited in antiquity for medical surgery:

[1.202] As for the Araxes, it is, according to some accounts, larger, according to others smaller than the Ister (Danube). It has islands in it, many of which are said to be equal in size to Lesbos. The men who inhabit them feed during the summer on roots of all kinds, which they dig out of the ground, while they store up the fruits, which they gather from the trees at the fitting season, to serve them as food in the winter-time. Besides the trees whose fruit they gather for this purpose, they have also a tree which bears the strangest produce. When they are met together in companies they throw some of it upon the fire round which they are sitting, and presently, by the mere smell of the fumes which it gives out in burning, they grow drunk, as the Greeks do with wine. More of the fruit is then thrown on the fire, and, their drunkenness increasing, they often jump up and begin to dance and sing. Such is the account which I have heard of this people.

[4.73] Such, then, is the mode in which the kings are buried: as for the people, when any one dies, his nearest of kin lay him upon a waggon and take him round to all his friends in succession: each receives them in turn and entertains them with a banquet, whereat the dead man is served with a portion of all that is set before the others; this is done for forty days, at the end of which time the burial takes place. After the burial, those engaged in it have to purify themselves, which they do in the following way. First they well soap and wash their heads; then, in order to cleanse their bodies, they act as follows: they make a booth by fixing in the ground three sticks inclined towards one another, and stretching around them woollen felts, which they arrange so as to fit as close as possible: inside the booth a dish is placed upon the ground, into which they put a number of red-hot stones, and then add some hemp-seed.

[4.74] Hemp grows in Scythia: it is very like flax; only that it is a much coarser and taller plant: some grows wild about the country, some is produced by cultivation: the Thracians make garments of it which closely resemble linen; so much so, indeed, that if a person has never seen hemp he is sure to think they are linen, and if he has, unless he is very experienced in such matters, he will not know of which material they are.

[4.75] The Scythians, as I said, take some of this hemp-seed, and, creeping under the felt coverings, throw it upon the red-hot stones; immediately it smokes, and gives out such a vapour as no Grecian vapour-bath can exceed; the Scyths, delighted, shout for joy, and this vapour serves them instead of a water-bath; for they never by any chance wash their bodies with water. Their women make a mixture of cypress, cedar, and frankincense wood, which they pound into a paste upon a rough piece of stone, adding a little water to it. With this substance, which is of a thick consistency, they plaster their faces all over, and indeed their whole bodies. A sweet odour is thereby imparted to them, and when they take off the plaster on the day following, their skin is clean and glossy.